dbFront can be fully set up in 3 minutes or less but the practical decisions about where and how to set it up mean that it may take longer.  Some of the decisions that need to be made upfront are:

If you are not sure which network configuration you should use, then please read the Setup Options section below which explains the different setup options.

The dbFront installer will install both the Web Application and the Service correctly.   If you installed everything on the same server then you can skip to step 3 where you set up the database connections.  If you chose a manual installation, or if your situation is more complex then you can review the settings in steps 1 and 2.

There is a wide variety of network setup options available.  The following two sections will compare two of the main options but the installation can usually be tailored to suit your network needs.

dbFront can be run entirely from a single server.  This server could even be the database server.  But just because it can be done does not mean that it should be done.
A single server installation should only be considered in situations where: 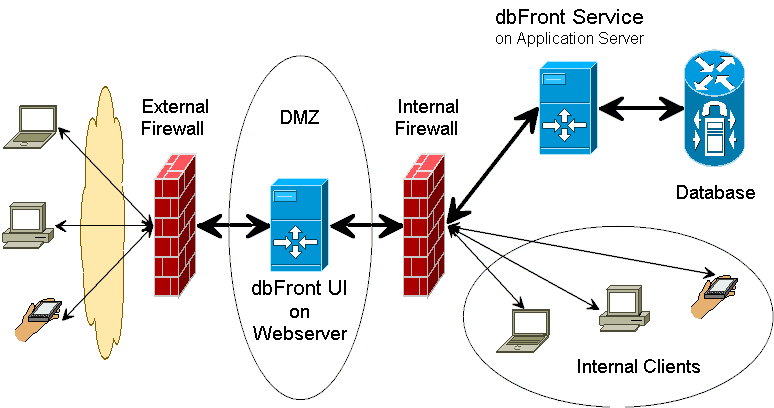 A DMZ is a specially protected network zone created for web servers that sits between your internal network which is usually considered the safe zone and the fully exposed internet.  Web servers in the DMZ are partially exposed to the internet so that users on the internet can access them but this access is limited to make it difficult for attackers to abuse these servers.

Once the layout of the infrastructure has been decided then the next step would be to set up the webserver and install the dbFront UI.

Content you want the user to see goes here.
close